salt equivalency table. Each has the same saltiness.

Q: What is the function of salt in baking? Can I leave it out of a recipe?

Unless your dietitian or doctor prescribe a low-sodium diet, keep the salt in your baking recipes at the level called for. Salt has several functions in baked goods:

Without salt, bread rises faster and air pockets enlarge where the gluten has broken, allowing holes to form. Bread made without salt will taste bland. If you choose to eliminate salt, decrease the proofing time so that the large air pockets don't have time to develop. Salt should not be eliminated from recipes using automatic bread-making machines.

Salt substitutes, containing only potassium chloride and no sodium chloride, are not recommended for use in baking. The flavor and texture of baked goods will not be the same quality.

Salt substitute mixtures containing part sodium chloride, such as Morton Lite Salt� Mixture, can be used successfully in baking. For most recipes, a potassium chloride/sodium chloride blend can replace table salt in the same quantities, as directed. Recipes using an automatic bread-making machine may not perform as well.

Q: Is all salt iodized?

No, both non-iodized and iodized table salts are available and are clearly labeled. Iodized table salt provides iodine, which is needed for proper functioning of the thyroid gland and to prevent goiter. Plain table salt is available for consumers who choose to limit their iodine intake or must do so for medical reasons. 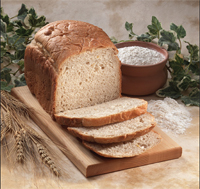 When salt is reduced, the yeast becomes more active. Reducing the sugars may keep the doughfrom rising too quickly.

It's hard to walk down a supermarket aisle these days without seeing the words “reduced salt” or “low sodium” on packaging.

Americans consume about 4,000 mg of sodium per day, which is almost twice the recommended amount, according to the Center for Science in the Public Interest (CSPI). The FDA currently classifies salt as GRAS. The 2005 Dietary Guidelines for Americans recommends that young adults consume less than 2,300 mg of sodium daily and that people with hypertension, African Americans and middle-aged or elderly people limit their salt intake to 1,500 mg.

In 2005, CSPI petitioned the FDA to remove the GRAS status of salt and require manufacturers to reduce sodium levels in processed foods, stating too much sodium is raising blood pressure and prematurely killing close to 150,000 every year. In November 2007, the FDA held a hearing to discuss its policies regarding sodium in foods.

Consumers are becoming aware of the sodium levels in foods, as more Americans face high blood pressure and heart disease, and the media gives sodium consumption more attention. This trend has bakers striving to reduce sodium levels in baked products to comply with consumer demand.

Oftentimes, the average consumer does not understand the difference between salt and sodium. “When people talk about salt reduction, I believe they also mean sodium reduction. Salt is an ingredient that contains sodium. Sodium also comes from other sources. Leavening systems, such as sodium bicarbonate, contain significant amounts of sodium, so you have to look at not just salt reduction, but sodium reduction in general,” says John Brodie, technical service manager, bakery, Innophos, Cranbury, N.J. 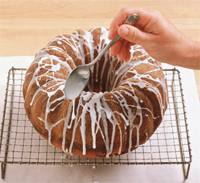 Sodium may come from added salt in many baked products, but in cakes it comes from leavening agents.

“We're seeing a lot more companies looking at their formulas, especially if they're working with school lunch programs,” Brodie says. Initial requests to lower sodium came from schools looking for more healthful lunch choices for students, and the trend has moved to mainstream consumers.

The effects of sodium on our health

With all the talk of sodium reduction, it can be difficult to remember that our body needs sodium to survive. Having a proper balance of water and sodium in the body is necessary for good health, but too much sodium or water upsets the balance, and thus one's health.

As bakers modify formulas to appeal to health-conscious consumers, they need to be careful to use the proper wording. The FDA and USDA state an individual food using the label claim “healthy” must not exceed 480 mg sodium per reference amount. “Meal type” products must not exceed 600 mg sodium per labeled serving size. In order to label a product “sodium-free” it must contain less than 5 mg of sodium per serving. For reduced sodium products, the usual sodium level is reduced by 25 percent. Unsalted or no-salt added products are made without salt, but still contain sodium naturally found in the food.

“Potassium chloride is generally the salt of choice for the food industry…but its off-taste makes it unsuitable for all applications,” Gascon says. Taste modifiers can assist in masking any off flavors that result from using a potassium chloride substitute.

“Unfortunately, the vast majority of these masking agents and flavor modifiers only partially mitigate the bitterness, and residual bitterness can have an impact on the flavor profile of the end product,” Lutz says. Cargill offers a brand of salt for topical applications. This salt crystal is uniquely shaped to offer a larger surface area and a lower bulk density for better solubility, which can allow for sodium reduction in topical applications. Wixon, meanwhile, offers a 50 percent reduced-sodium salt, made by combining a taste modifier with potassium chloride and regular salt.

Before making formula changes, it is important to determine the sources of sodium. “In most bakery items, “the sodium may come from the added salt, while in a cake the sodium will be coming from leavening agents, mostly sodium bicarbonate,” Gascon says. “In the first case where added salt is the culprit of the sodium levels, consider whether adjusting the sweeteners, acids, starches or fats may help enhance the saltiness perception.”

Sodium acid pyro phosphate (SAPP) is probably the most widely used leavening in baking. SAPP has about 21,000 mg of sodium per 100 g of product, while calcium-based leavenings have 0 g, Brodie says. “If you're switching from SAPP to a calcium based leavening, your formula will drop anywhere from 20 percent to 30 percent sodium content, which is a significant reduction.” While SAPP has an aftertaste, calcium has a bland neutral flavor. “It's going to give you a cleaner flavor and other flavors may actually come through better for you,” he adds.

In addition, while SAPP offers just trace amounts of calcium, calcium-based leavenings offer the added benefit of increased calcium, and in some instances bakers can achieve 20 percent of the recommended daily allowance for calcium and make a label claim.

Bakers also must take into account the functional properties of salt in dough development and rising. When salt is reduced, the yeast becomes more active, so bakers may need to reduce the sugars to keep the dough from rising too quickly. These changes should help reduce the sodium while enhancing the salty flavor. If the changes fail to deliver the desired results, a bake-proof salt replacer can help achieve the proper balance. If the sodium in the formulation is coming from sodium bicarbonate, alternative leavening agents, such as potassium bicarbonate, can be used as a replacement. “Potassium bicarbonate may impact the cost and also has some off-flavor notes, so bakers may need to use a taste modifier to mask that off-note,” Gascon says.

Balancing taste perceptions can be complicated. Each application requires a unique approach. “Reducing sodium levels involves a combination of different factors, not one specific one,” Gascon says. “For drastic reduction of sodium levels, a lot of fine tuning is required. This often drives the need for the food technologist to work closely with the technical staff of taste modifier suppliers.”