Avanti's is an Italian restaurant in Peoria, Illinois and the surrounding area well-known for a great gondola.

My attempt at making Avanti's bread used for their gondolas. I suggest weighing the flour to get an accurate recipe. I thought it was a little better because the bread was fresh from the oven. It had the right amount of sweetness, too.

To make the gondola, slice the bread in half lengthwise and put on mayo, thin ham slices, thin salami slices, American cheese slices, iceberg lettuce. I thought at one time (in the late 70's) there was tomatoes included. 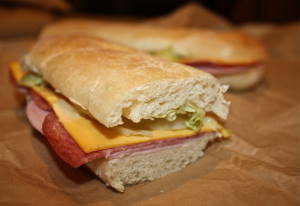 4. Switch to the dough hook and knead until thin strands appear (about 10 min). The dough will be moist.

5. Remove bowl and cover with plastic wrap (I use a plate sometimes). Punch a small hole in the top so gases escape. Let rise at room temperature 2 to 3 hours or it has doubled in size.

6. Punch down and let rise another 30 minutes.

7. Divide dough in half and roll into 12" loaves on an oiled cookie sheet. Cover and let rise 1 hour.

9. Let loaves sit 5 minutes then move to cool on rack.

Instead of letting dough rise at room temp (step 5), put in refrigerator overnight to rise for a better flavor. You can use less yeast, too (like 3/4 tsp).

Next time I will try mixing egg, oil, sugar, salt together with a hand mixer.